When a liquid is cooled quickly below its melting temperature, it rapidly loses kinetic energy, resulting in a sharply increasing viscosity and an accompanying ordering of the liquid structure. When crystallization can be avoided, the liquid can persist in a metastable amorphous state, known as a glass.  The nature of the glass transition and why some liquids are better glass formers than others rank among the most important and interesting questions in condensed matter and materials science. First discovered more than 50 years ago [1], metallic glasses are now finding increasing utility as useful materials for technological applications [2]. Ultimately, glass formation hinges on bypassing crystallization.  Since the viscosity varies by some 15 orders of magnitude from its value at the melting temperature to that at the glass transition temperature, it is a particularly sensitive property for characterizing different liquids.

Angell proposed that the temperature dependencies of the viscosities of different liquids can be described within the concept of fragility. 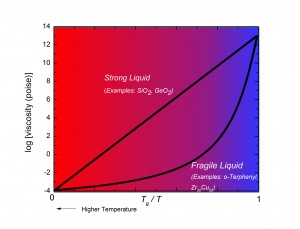 As shown in the figure, the “Strong Liquids” are those whose viscosity changes gradually over a wide temperature range while “Fragile Liquids” display rapid change in the viscosity as the glass transition temperature is approached.  Although generally defined in terms of dynamical properties, such as the viscosity or the relaxation rate, theoretical and experimental evidence [3-5] indicates that fragility is related fundamentally to thermodynamic properties, including the excess entropy and specific heat, suggesting that it should also have a structural signature. This presumed link to structural ordering is often used to qualitatively describe fragility.

We’re working on an idea that the structural evolution of a liquid also can be characterized by fragility.  There seems to be some evidence from this from previous studies of metallic glasses, however, quantitative studies of the structural evolution of liquids and glasses together remain elusive, largely because the liquid is so difficult to probe and because structural studies of liquids are notoriously susceptible to scattering artifacts.  Recently, with the development of the Washington University Beamline Electrostatic Levitator (WU-BESL) we been able to make tremendous strides in searching for this “Structural Fragility.” 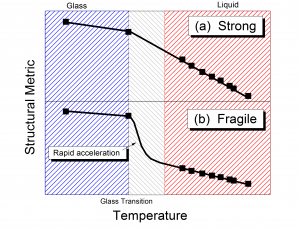 The rapid acceleration in Cu50Zr50 (and other fragile liquids) contrasts sharply with that observed in high glass forming ability metallic liquids.  This suggests that there is a structural signature associated with a good glass-forming liquid, and that this signature may be universal, at least in metallic liquids.

For some more papers on this topic from the Mauro research group please see: